I recently read the fascinating book ‘The Success Equation: Untangling luck in Business, Sports and Investing’1, which explores, how much of one’s success or failure can be attributed to luck as opposed to skill (leading to much reflection). Investing, as the author points out, by its very nature involves a fair amount of luck compared to other activities, which are less probabilistic. For example, if I had to race Usain Bolt over 100m he would beat me 100% of the time, whereas if we both picked stocks he would have a relatively higher success rate than my zero.

The one story in the book that really stuck with me was the potential importance of checklists and how a simple checklist proposed by a specialist at Johns Hopkins Hospital, significantly reduced fatalities from infection during surgery in the US, despite initial opposition from surgeons.

A simple checklist for thinking about the appropriate weighting to local equities may look something like Table 1. 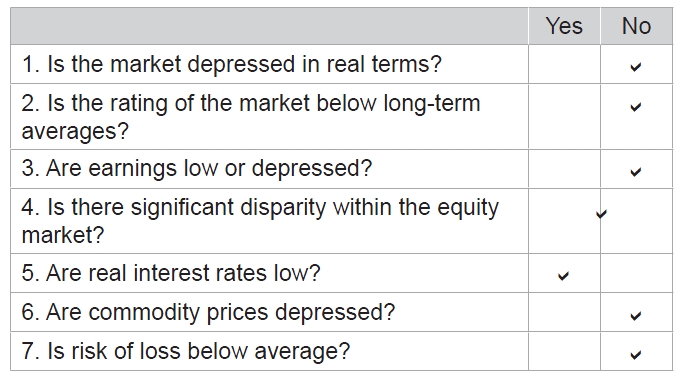 The justification for the placing of the ticks:

Nonetheless, it is incredibly difficult to forecast the future. Being correct involves an element of luck, which is why we place so much emphasis on our investment process; we hope to reduce the contribution of luck as much as possible.