Retirement reform: Proposed changes you need to know about

We have known for some time that Treasury seeks to address some of the many shortcomings of our “retirement savings culture” and the latest paper on the subject explains some of the proposals it wishes to implement. Whilst these are only proposals, it is imperative to understand the direction we are moving in to enable clients to make informed decisions.

The proposed date for these changes to become effective is expected in or after 2015. For ease of reference, we have summarised the proposal document into the following topics:

Deductions of up to 27.5% of the greater of remuneration or taxable income will be allowed, regardless of which type of retirement fund one contributes towards – up to an annual maximum monetary cap of R350 000. This means an increase in tax deductibility for those earning up to R1 272 727 per annum and contributing up to R29 167 per month towards an approved retirement fund.

Since most South Africans fall well within these parameters, this proposal will in effect mean an increase in tax deductibility of retirement fund contributions on our current tax regime.

The table below is an example of how the proposed tax regime will affect an individual earning R500 000 per year, assuming the employer contributes 7.5% of the employee’s pensionable income. 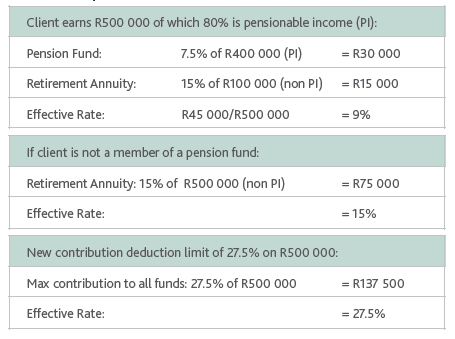 One of the biggest problems South Africans face when saving towards retirement is that most people elect to cash in their retirement benefits upon resignation from an employment fund. Government wants to bring to an end the option to cash in one’s entire retirement fund value on resignation and has proposed that the member’s benefit must be placed into a preservation fund on “withdrawal” as well as when a non-member spouse is awarded a pension interest on divorce. The member or spouse can thereafter elect to transfer their benefit into a preservation fund of their choice.

The member will be allowed one withdrawal from the fund each year, with a limit of the greater of 10% of the initial value or the state old age grant at the time. Given the current old age grant, the proposed annual withdrawal allowance amounts to a preservation free withdrawal allowance of R15 120 per year. The 10% of the initial value will become relevant for contributions in excess of R150 000 per annum (10% of an annual contribution of R150 000 being roughly equal to the state old age grant). Any withdrawal not taken in a year will be carried forward to the next year.

Again, Treasury has indicated that the members vested rights will be protected. This means that all funds accumulated in a provident fund prior to the proposed implementation date will be fully accessible at retirement. Funds accumulated thereafter will be subject to the proposed legislation. Members over the age of 55 at the date of implementation will also not be subject to the new legislation.

Treasury’s proposal requires that all funds must have a default annuity product open to its fund members to encourage them to purchase an annuity instead of commuting. Members will thereafter have the option to purchase an annuity of their choice. Treasury has also mentioned that they plan on changing the de minimus amount for commuting a retirement fund from R75 000 to R150 000. This will mean that any fund value under the amount of R150 000 will be able to be fully commuted instead of the usual one third/two third option at retirement.

The proposal enables the creation of a pool of assets for an individual for immediate access in a financial emergency.

It is suggested that the vehicle will function as a wrapper, exempting all investment returns from income, dividend and capital gains taxes. The contribution limits suggested will be R30 000 per annum and R500 000 in one’s lifetime. These limits will be adjusted for inflation on a regular basis. At this stage, Treasury is looking at two broad categories of products, namely interest and non-interest bearing products. Possible products suggested are: