After a prolonged period of relative underperformance, since January this year the Orbis Global Equity Fund has meaningfully outpaced its benchmark in US dollars, returning almost 26%, compared with the FTSE World Index return of 10.2%. The Allan Gray-Orbis Global Equity Feeder Fund, which also benefited from the weaker rand, has returned 54% this year (to end August) outperforming the FTSE World Index (including income) by 21% in rand terms. Seema Dala discusses some of the reasons behind this turnaround, while cautioning investors not to look too much into short-term performance.

Regular readers of our Quarterly Commentary will know that Orbis and Allan Gray seek to position our portfolios in the most attractive opportunities at any given time, adopting a ‘bottom-up’ approach and searching for undervalued stocks. Ultimately, our funds’ overall positioning is driven by our analysts’ views on individual companies, rather than global macroeconomic events and popular trends. Bearing this in mind will help with peeling back the layers to understand where the recent performance has come from.

What factors have contributed to the recent outperformance?

It may be tempting to attribute the strong performance of the Orbis Global Equity Fund to Orbis’ holdings in Japan, a market that has risen 30% in yen terms so far this year (to end August). Having a greater weighting in Japanese stocks than the benchmark FTSE World Index has indeed helped the Fund’s relative performance, but this has been offset by the negative impact of the Fund’s above-average weighting to Asia ex-Japan, a region where stock markets have lagged their global peers.

Overall, the contribution from the decisions to allocate capital between the major geographic regions – driven as always by Orbis’ bottom-up research – has actually been negative for the Fund this year. In line with the outperformance since the inception of the Global Equity Fund, stock picking within most regions has accounted for the overwhelming majority of the Fund’s performance since yearend, which is also the case since the inception of the Fund. In particular, stocks in North America and Asia ex-Japan have been strong contributors to relative return. 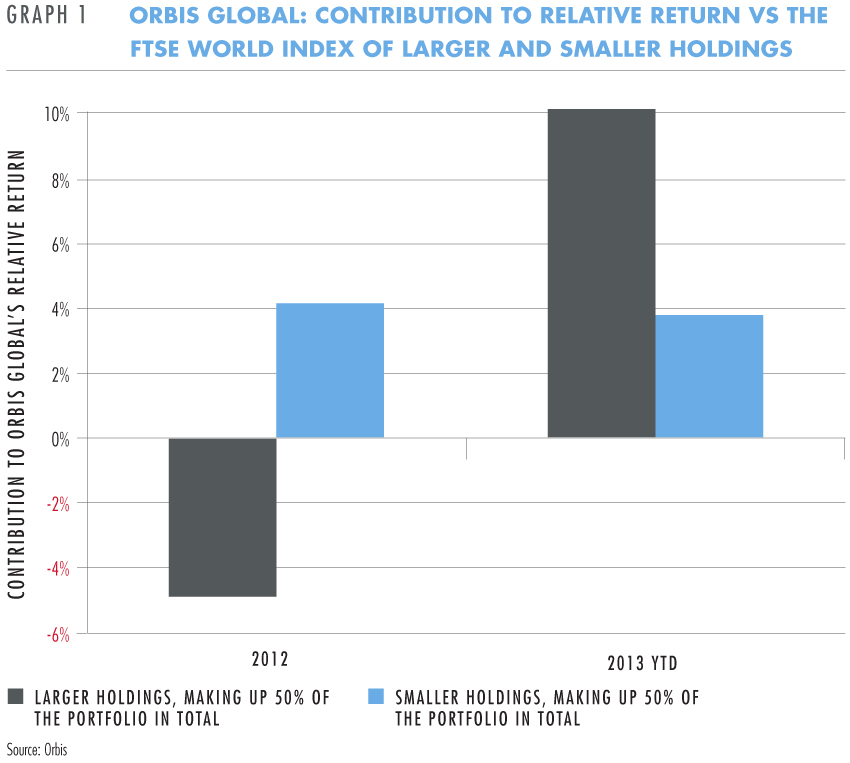 It is striking that many of the Fund’s best-performing stocks in recent months have been precisely those that detracted from performance before the rebound. The Fund’s largest holdings, in aggregate, went from making a negative contribution in 2012 to providing a strong positive contribution so far this year, as can be seen in Graph 1.

This reversal of fortune is consistent with what one should expect from Orbis and Allan Gray’s fundamental, long-term and contrarian investment philosophy. It is not uncommon to see a stock go from being a major laggard to among the biggest winners in a short period of time, often without a commensurate change in a company’s fundamentals.

A good example is Micron, the largest year-to-date contributor to relative performance. Micron is a US-based global semiconductor manufacturer, producing memory chips that are used in PCs, tablets, smartphones and servers. Orbis has owned Micron once before, from 2007 to 2009, and most recently bought back into the company in 2012, with a positive view on industry and company fundamentals. Orbis was able to build a holding in this stock at attractive valuations when it was deeply out of favour with the market, and to buy more shares as the market continued to lag (see Quarterly Commentary 2, 2012 ‘Investing: A history of bubbles’). In late 2012, Micron cleared several legal milestones in its acquisition of the bankrupt Japanese semiconductor manufacturer, Elpida. At the same time, weaker players had exited the industry leading to a rationalisation of supply, which aided a recovery in memory chip (DRAM) prices. This news contributed to a rerating of the stock – since November 2012 Micron has outperformed the local market by over 70%. Orbis has locked in some profits by trimming the Fund’s position, but continues to have a positive long-term view on the structural change for the memory industry and the resulting leverage for Micron’s earnings power. It remains a Top 10 holding in the Fund.

What are the expectations for returns over the next 12 months?

Given the strong performance of the Global Equity Fund, it is reasonable to wonder how Orbis perceives the current opportunity set, and whether or not returns similar to that of Micron can be expected from the stocks that are now prominent in the portfolio.

As a result of the ‘bottom-up’ approach described earlier, the Global Equity Fund looks very different from the index, and there is almost no discernible pattern to the types of companies that Orbis owns over time. Table 1 shows the Top 10 contributors to the Orbis Global Equity Fund’s return since the Fund’s inception in 1990. Although there have been some meaningful technology winners, some of the best investment ideas have come from other areas, such as used cars, food and mobile homes. Some were large caps, some were small caps. Some were considered value stocks at the time of purchase, others were growth names. The one thing they all had in common when Orbis first invested was a significant discount to our analysts’ assessment of intrinsic value of the underlying business. 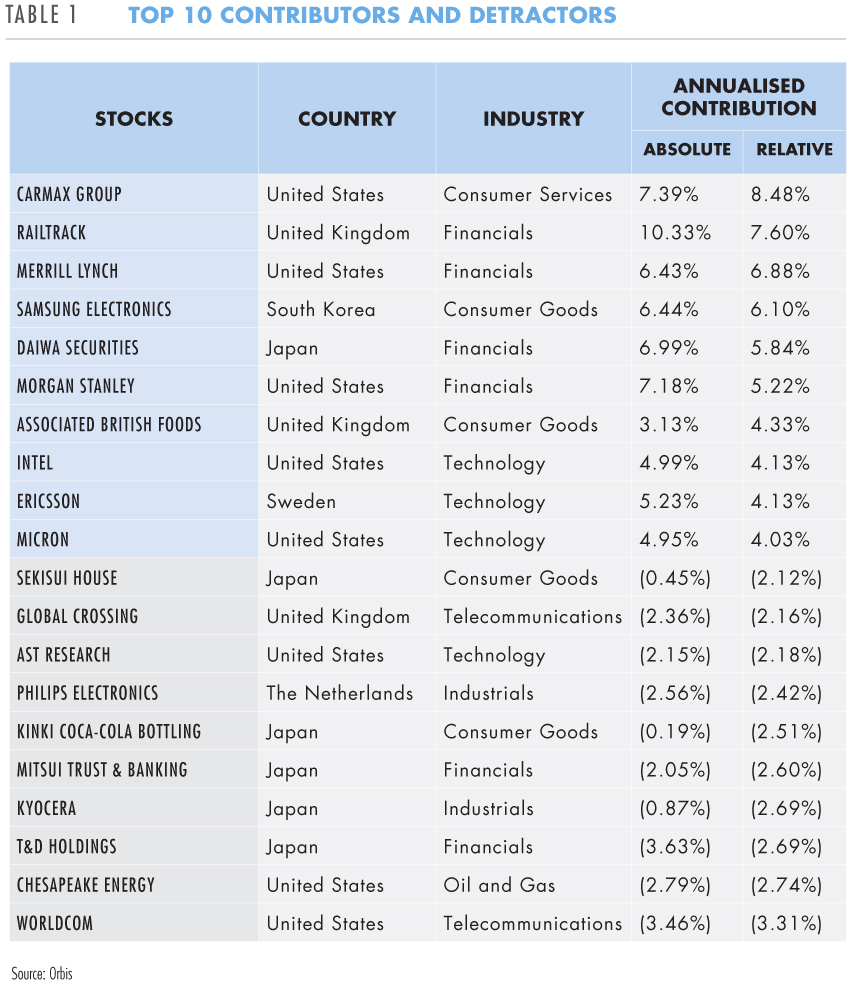 It is difficult to predict with any certainty which of the stocks in the portfolio at any one time will prove to be ‘winners’ or ‘losers’. Statistically, in the past, our analysts have been proven wrong one out of three times. Sometimes this is because of the irrationality of markets, where stocks remain undervalued for much longer than expected, and sometimes it is because Orbis gets the investment case wrong. Importantly, where new information or analysis shows that an investment case was flawed, the relevant position is culled with discipline. This means that regardless of the lists of most recent winners or losers at any time, the portfolio carries the full conviction of the Orbis investment team.

As at 30 September 2013, the sectoral exposure of the Global Equity Fund looks similar to the end of December 2012. The Fund is overweight in the technology, oil and gas and healthcare sectors, and underweight in consumer goods, industrials, basic materials, and financials as shown in Table 2. From the perspective of the South African investor, this sectoral exposure is particularly interesting. Orbis is underweight in basic materials and consumer goods, which in a global opportunity set look relatively less attractive. In our local equity portfolios, by contrast, Allan Gray’s SA equity portfolios are at equal weight to the market’s substantial allocation to resources and also include large positions in consumer goods and industrial businesses such as British American Tobacco, South African Breweries and Remgro. Our clients own these partly because we find the underlying businesses attractive in their own right, but also because they offer the best relative value in a limited universe of SA stocks. Where Allan Gray considers approximately 250 listed companies every year, Orbis starts by screening at least 6 000 stocks. This broader universe brings a more diverse opportunity set in which Orbis is able to find great businesses trading at very attractive multiples. 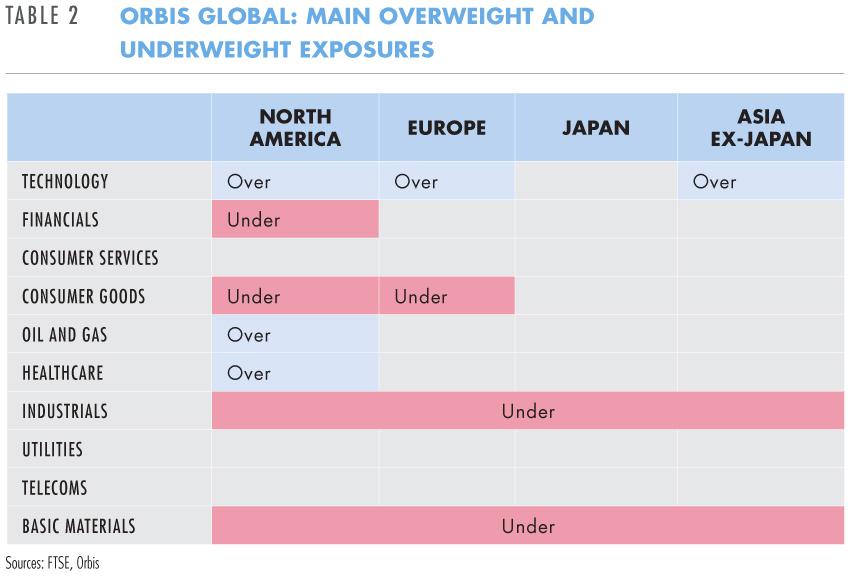 The Orbis Global Equity Fund has significantly outperformed its benchmark this year, and it has been encouraging to see the Orbis funds respond to a more favourable environment for bottom-up stock pickers. Despite this recent strong performance, we continue to believe that global investment opportunities offer investors better relative return prospects than the domestic market.