Managing risk and tax on retirement

Posted on 10 September 2014 by Matthew Lester, Professor of Taxation Studies at Rhodes Business School, Grahamstown, and a member of the Davis Tax Committee

The annual SARS statistics report is a fascinating document. If you are a tax nerd, that is. Unfortunately not many appreciate the valuable data and trends contained therein. So the document is seldom studied in any detail. 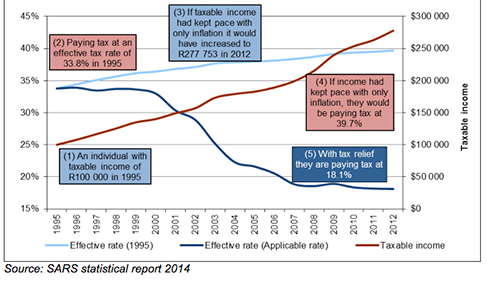 SARS is particularly proud of the above graphic that reflects how the average rate of personal income tax has reduced from 33,8% in 1994 to 18,1% today. The more cynical commentator will say ‘If you believe that, you will also believe in Mary Poppins.’

Certainly South Africans are taxed on a far broader range of fringe benefits today. This has kept the pressure on the employed taxpayer. We have also seen the implementation of capital gains tax (CGT) and residence-based taxation. The result is that personal tax collections, measured as a percentage of total tax collections, have increased to 36% today. This, despite the personal income tax tables being adjusted annually to take account of inflation and fiscal drag.

If one wants to dwell on the negative side of life it can also be argued that if the average rate of tax has indeed dropped, then why has the flat 30% tax rate applied to the individual policyholder fund not been adjusted downwards to reflect the average personal income tax rate of South Africa?

Let’s dwell on the positive aspects of tax reform. And, in particular, the better tax deal given to retired taxpayers. No, this article is not going to dwell on the increase in the tax-free lump sum concession of R500 000, effective 1 March 2014. Although the increase in the threshold is welcome, a R500 000 tax-free lump sum is a small component of a retirement plan.

During the period 1980 to 1994 the massive shortfalls in tax collections were slowed to some extent by steadily increasing the low- and middle-income personal tax rates. This remained unchecked in the first years of the new South Africa.

In the 2000 National Budget Speech the then-finance-minister, Trevor Manuel, committed National Treasury to broadening the South African tax base and reducing the tax burden on the individual taxpayer. Over the last 15 years National Treasury has not departed from this objective. The annual effect of these adjustments is small, but measured over 15 years the effects are substantial. But few stop to carefully study the 2014/15 personal income tax tables, deductions and allowances.

Today the employed personal taxpayer with taxable income of R500 000 per annum currently has an average tax rate of 23,5%.

Prima facie, when the taxpayer attains the age of 65 years, the only additional tax benefit granted is an additional rebate of R7 110. Enough to reduce the average tax rate to 22,1%. This is where the analysis generally stops!

But at age 65 the taxpayer is granted other forms of tax relief above the age rebates:

In addition to the above the retired taxpayer ceases receiving fringe benefits from employment. In retirement, income is received in the form of annuities, capital gains and interest.

Now consider the average tax rate on a retired taxpayer with the following income and expenditure:

By my calculations the average tax rate resulting from the above package reduces to 12%. Many would consider this very acceptable.

But there is a further change in retirement planning that is critical to the debate. In the past, retirement annuity fund contributions had to cease at 70 years old. This limit has been removed and allows the pensioner to continue reducing their tax exposure until death. Applying the living annuity principle, whatever remains within the retirement annuity can be passed onto nominated beneficiaries on death of the member.

With effect from the 2015/16 year of assessment all taxpayers will be entitled to make tax-deductible contributions to retirement funds to the extent of 27,5% of taxable income, tax deductible, subject to a maximum of R350 000 per annum.

Applying the above principle to the example, if the taxpayer contributed 27,5% of taxable income to a retirement annuity fund, the average rate of tax will reduce to less than 6%.

A fundamental criticism of retirement annuity funds is often ‘Yes, you are granted a tax deduction on contributions, and retirement funds are exempt from income tax and dividend tax. But you will pay it all back when the annuity is taxed during retirement.’

The true answer is ‘Yes, annuities constitute gross income in a taxation computation. But in South Africa there is a huge difference between gross income and the resultant tax liability. You have to perform the actual calculations.’

Changes in retirement annuity funds over the past 20 years

My dad was a teacher and started a retirement annuity in the early 1970s. The annuity was simply miserable. I wish I could find the financial adviser today. I would give him a piece of my mind, if not more.

But so much has changed over the past 20 years.

Financial advisers used to make much fuss around the retiring taxpayer. Thereafter the taxpayer was left to pay whatever tax resulted after retirement. No more.

Today the retired taxpayer is in desperate need of a detailed financial plan that schedules the receipt of annuities to match the tax deductions available, thereby driving down the average rate of tax during retirement.

Last week a student asked me, ‘Prof, what’s your financial plan for retirement?’

‘I’m going to register as a financial adviser and help other pensioners get it right. I should enjoy a very comfortable retirement.’

I think that left the honours with me.