Chronicling the economy is always a challenge. We are, first and foremost, investors and we analyse businesses better than we understand the economy. That said, the economy can clearly have a huge impact on a business’s fortunes. So in the absence of delivering anything definitive about the economy, we continue instead to offer some of our bigger-picture observations that help us frame an investment’s potential outcome.

Surveying the economic landscape this year, we’re inclined to consider the power of myth to explain the inexplicable. The American author Joseph Campbell considered myths to be public dreams, and we see both public officials and private investors engaged in some serious flights of fancy. Perhaps believing in myths is the only means to cope with the actions of the few being taken for the many.

Zeus punished Sisyphus for his hubris by having him push a huge boulder up a hill, but before he could reach the top, it would always roll back down, forcing him to begin again. The US Federal Reserve seems engaged in a similarly unproductive task. The printing of money, the expansion of its balance sheet and the management of interest rates lower has only served to elevate risk assets rather than grow the economy. We cannot think of a single example in history where centralised planning dictated successful economies. New York Fed President William Dudley adds little comfort with his admission at a recent economics conference that, “We don’t understand fully how large-scale asset purchase programs work to ease financial market conditions. There’s still a lot of debate …” We sincerely hope the Fed and the rest of us avoid Sisyphus’s consignment to an eternity of useless effort and perpetual frustration.

But our optimism erodes when considering the following: GDP has increased by just $2.2 trillion since 2008, despite a $7.3 trillion increase in US government debt since 2008, part of which funded a more than $3 trillion increase in the Fed’s balance sheet. This poor return on investment isn’t new; it’s just getting worse. This begs the obvious question: Where would the stock market be without the Fed fuel? The strong relationship between the level of the market and the size of the Fed’s balance sheet makes for interesting contemplation (see the chart below). 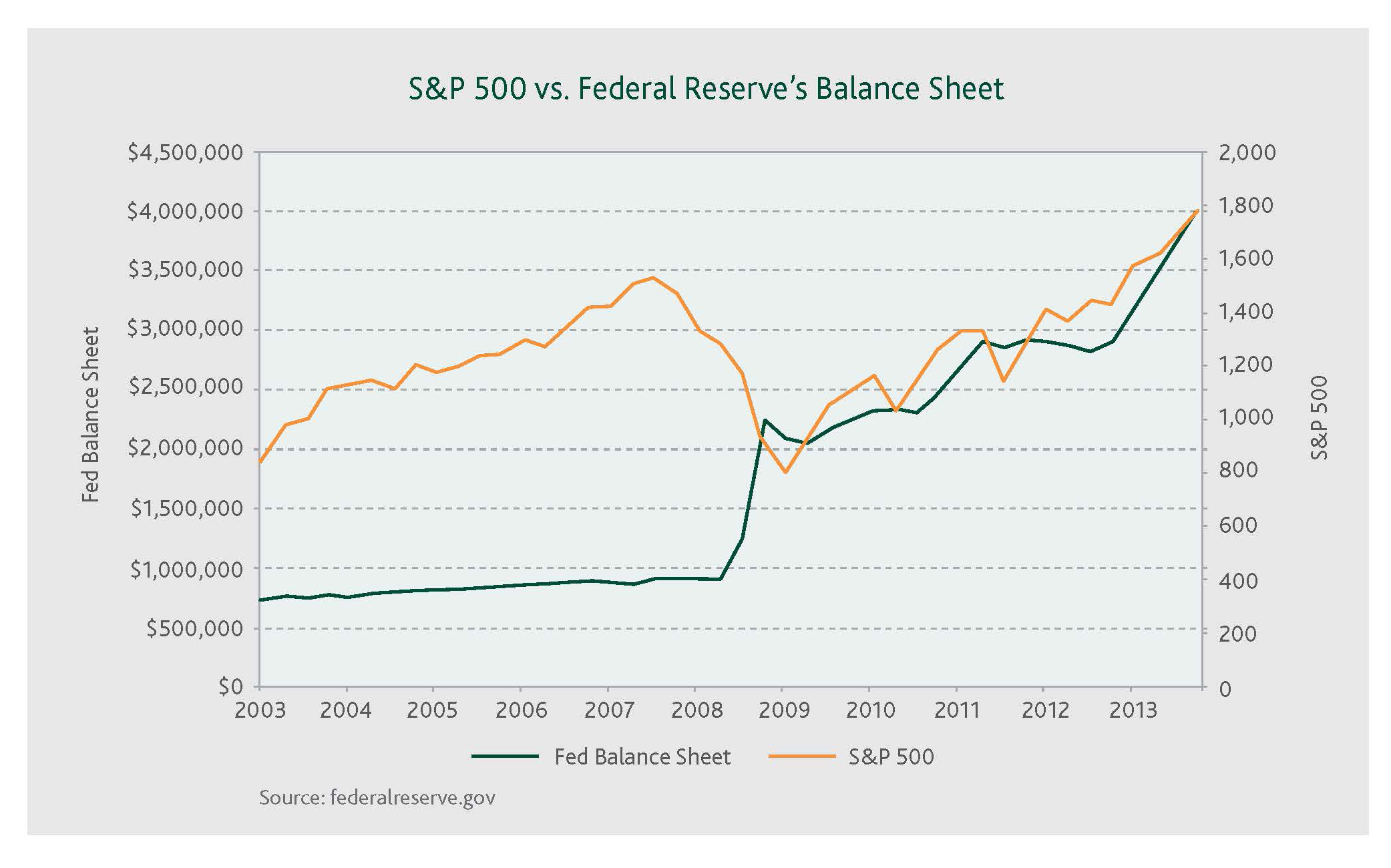 Many investors have been seduced by the alluring but dangerous – if not deadly – call of the Sirens that has manifested itself in the form of low interest rates and aggressive government spending. This potent combination has led not only to a soaring stock market but inefficient and excessive spending as well. This has resulted in continued budget deficits that are only manageable because of the Fed’s success in driving rates lower on both the short and long-end of the curve.

We question what’s sustainable. One successful real estate investor pointed out that as much as he’d like to liquidate his entire portfolio today at huge gains, he’d have a lot of money after paying taxes but no income. So he won’t sell and others, who want or need more return than a conservative investment might yield, are liquidating those investments for even more risky propositions. It’s an unusual environment we find ourselves in, much of it thanks to extraordinary Fed policy. We should fear the repression of a government that redirects capital to itself, with one example being interest rates so far below the real inflation rate. Savers are punished and seekers of return are pushed out the risk curve.

Unfortunately, our guardians, like Narcissus, seem fixated on themselves. They seem, in our view, more concerned with their careers than their constituents. They generally lack the skills to protect us anyway. They might see themselves as saviours, but they are largely unschooled in either business or economics and lack practical (i.e. non-political) work experience. And yet they make big decisions whose implications might not be known for many years, long after most have left office. As the economist and columnist, Thomas Sowell, wonders, “It is hard to imagine a more stupid or more dangerous way of making decisions than by putting those decisions in the hands of people who pay no price for being wrong.”

Frankly, all of this makes us feel like we are living amongst the Lotus-Eaters of The Odyssey, the island people addicted to the fruit of the lotus tree, a narcotic that left them in a stupor. Thousands of years later, our lotus tree bears easy money and many otherwise rational investors cannot resist its temptation, but we’re left wanting. At which point in time do central banks capitulate? Or do they just keep inflating?

Greek mythology offers various parables to describe unintended consequences and the catastrophic chain reactions they can set into motion. Zeus tasked Prometheus with creating man, but he then stole fire from Zeus and gave it to man. As a punishment, Zeus created the first woman, Pandora (strange form of punishment!). We all know of the unexpected evil unleashed into the world as a result of Pandora opening the box. Although the unanticipated reaction of the market and its participants has revealed itself in numerous ways, we expect that there will be more surprises that will ricochet through the global economy as a result of the policy decisions of recent years.

Nonetheless, we understand our commitment to you is that we will work to prosper while the gods play, recognising at the same time that complacent protagonists in Greek fables always got a comeuppance.